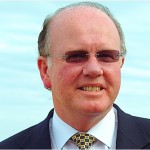 Three investors have shown an interest in the Port of Ramsgate, according to Bill Moses who launched the Ramsgate Ferry Campaign.

Dr Moses, who was born in Ramsgate and has more than 40 years experience in the ferry industry, launched the campaign last week as he believes the time is now right for a passenger ferry service to return to the port.

He said: “A large proportion of the interest has come from mainland Europe and we have even been approached by three potential investors. It is disappointing that we have heard nothing from Thanet District Council, particularly as a professionally managed campaign that includes support from stakeholders such as Kent County Council and the local UKIP-led council could shorten the time to find a suitable operator and reduce or even eliminate the cost burden currently suffered by every council tax payer in Thanet. We have one chance to get this right. Let’s not waste it.”

A Thanet council spokeswoman said, “We met with Bill Moses and his team a few weeks ago and listened to their ideas. We’re actively engaged with the industry and are developing an appropriate business strategy for the current market. We remain optimistic about the future of Ramsgate Port and have recently undertaken dredging of the approaches in anticipation of winning new business into the Port in the coming months.”