In response to demand on the routes from Rotterdam (Europoort and Hoek van Holland) to Killingholme, Stena Line is to add additional capacity by introducing a second ship from Europoort to Killingholme

The RoRo ship Caroline Russ, has been brought in to operate three times weekly from Europoort in the Netherlands and Killingholme in the UK, with the first departure from Europoort on October 31, 2016.

The ship will join current RoRo ship, the Stena Scotia, on the route. The frequency will hereby increase to six departures per week in each direction. The Stena Scotia was introduced on the route September 2014 as a complement to the two freight ships, the Stena Transit and Stena Transporter on the Hoek van Holland – Killingholme route.

Annika Hult, Route Manager at Stena Line North Sea says: “We have seen a strong growth in the transport market to the UK over the past several years. We introduced our freight ship the Stena Scotia in 2014 in order to accommodate growing volumes of traffic. I am very pleased to announce that we will now take the next step in the strategic development of our Rotterdam (Europoort) – Killingholme route.”

“We expect trade to remain strong and want to be in the best place to service our customers and meet additional demands. Europoort continues to develop as an important freight hub for Stena Line and we are confident our customers will react positively to our expanded service”, she continues. 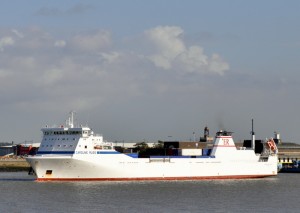