Scandlines increased revenue and boosted profitability in 2017 in line with the expectations for the year as the group’s expanded capacity on the Rostock-Gedser route was leveraged and investments dampened following a substantial strengthening of fleet and infrastructure in prior years. The group posted record financials and maintained strong operational performance, underlining the traffic machine’s position as a piece of crucial European infrastructure.

Total revenue grew by 4% to €487 million in 2017 (2016:  €480 million) driven mainly by the continued positive development on the Rostock-Gedser route. Traffic machine revenue from both routes grew by 6% to €352 million (2016: €333 million) on the back of expanded capacity, intensified marketing efforts and particularly strong performance in the freight segment, which recorded 12% growth in traffic volume. BorderShop revenue was stable at €135 million (2016: €137 million). Scandlines’ ferries completed more than 42,000 departures and transported a total of 7.6 million passengers, 1.8 million cars and more than 0.6 million freight units in 2017.

Scandlines strengthened profitability further in line with expectations as profit from ordinary activities (recurring EBITDA) grew by 7% to €194 million (2016: €180 million) corresponding to a recurring EBITDA margin of 40% (2016: 38%). Progress was mainly driven by higher volumes and revenue growth combined with operating costs only increasing moderately.

“There is a continued strong demand for our services at sea and on shore as we have successfully positioned Scandlines as a highly efficient and competitive piece of infrastructure. This position and the record performance in 2017 have not come easy. We have invested substantial resources and hard work to successfully build a strong and profitable business. While others discuss the opportunities of connecting Continental Europe and Scandinavia, we walk the talk every day. And we intend to continue doing so decades from now as our long-term strategy is sustainable after the planned opening of the Fehmarn Belt tunnel,” says CEO Søren Poulsgaard Jensen.

The efforts to meet customers’ demands ultimately contribute to improving utilisation of the group’s expanded capacity and driving further growth in terms of traffic volumes, revenue and profitability. Scandlines returned to a more moderate investment level in 2017 following sizeable investments in the group’s highly efficient traffic machine in 2014-2016 with a view to ensuring each customer the best available travel option. Scandlines furthermore continued the expansion of the SMILE loyalty programme, which now has more than 550,000 members.

“Our business is stronger than ever, and Scandlines’ future is bright. During the year, we completed a comprehensive refinancing, which significantly reduces the long-term cost of our debt. And in March 2018, we welcomed infrastructure funds First State Investments and Hermes Investment Management as new owners together with 3i continuing as a minority shareholder. This is testament to the long-term strength of our business model and Scandlines’ competitiveness. We will continue building a greener traffic machine in the years to come – and we will certainly keep on sailing,” says CEO Søren Poulsgaard Jensen. 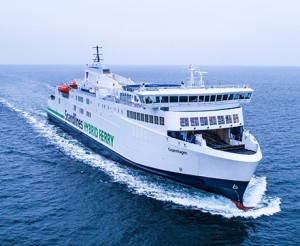 Scandlines expects moderate revenue growth and improved profitability (recurring EBITDA margin) in 2018 based on an expected increase in capacity utilisation on the Rostock-Gedser route and stable operations on the Puttgarden-Rødby route and in the group’s BorderShops.