Virtu Ferries’ Saint John Paul II will be the largest High Speed RoPax Catamaran operating in the Mediterranean and the second largest in the world.

The vessel’s maiden voyage saw her crossing the Indian Ocean, calling at the ports of Fremantle in Western Australia and Colombo in Sri Lanka for refuelling, before passing Somalia, at the Eastern tip of Africa, to transit the length of the Red Sea where she called at the last refuelling port of Jeddah before entering the Mediterranean via the Suez Canal.

The last leg of the journey, Port Said to Valletta, was covered in 30 hours. The vessel will be deployed on the Malta/Sicily route from March 2019.

Saint John Paul II was built to conform not only to the obligatory International Maritime Organisation High-Speed Craft Code 2000 but also to The EU Directive 1999/35/EC of the European Maritime Safety Agency of the European Commission. 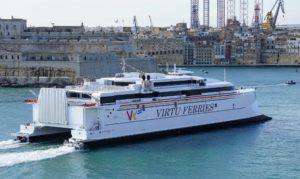