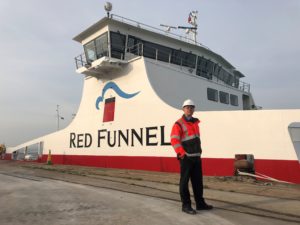 Fran Collins, CEO of Red Funnel, said, “We are all very excited to have welcomed Red Kestrel to her new home in Southampton ahead of her official naming ceremony next week. “The addition of a new ship is always an exciting time for everyone at Red Funnel. We’re thrilled that not only will Red Kestrel increase our total capacity but will be Red Funnel’s first dedicated RoRo freight ship since the company’s inception almost 160 years ago.”

Red Kestrel will operate between Southampton and the Isle of Wight and will officially enter service in May. As a freight vessel, she is limited to 12 passengers and constructed specifically to provide additional year-round freight capacity for Red Funnel’s Southampton to East Cowes route, which currently handles 53 per cent of all freight movements across the Solent.

At 74 metres in length, she will provide 265 lane metres of freight capacity. To minimise the environmental footprint, the hull shape has been designed specifically to reduce wash and a propulsion package has been selected to make her highly fuel efficient, whilst meeting the latest Tier III emission regulations. The use of proven azimuth thrusters supplied by Rolls Royce will also make the ship very maneuvrable. Red Kestrel will use the same berths as Red Funnel’s existing Raptor class RoPax vehicle ferries in Southampton and East Cowes. 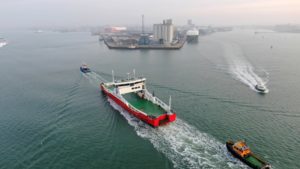