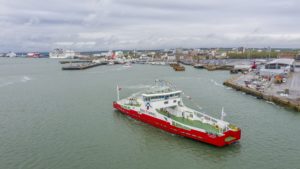 Following 14 months in development and cementing a new direction for a long-established British ferry company, today Red Funnel Ferries, the original Isle of Wight ferry operator, welcomed Red Kestrel its first RoRo with a traditional ship naming ceremony. The Great British-themed naming ceremony, which celebrated Red Kestrel being built in the UK, took place in Southampton docks by the Ocean Terminal and was witnessed by some 200 invited guests.

Karen George, wife of Red Funnel’s Chairman, Kevin George, had the honour of christening Red Kestrel, with the traditional formality of breaking a bottle of champagne across the stern of the vessel. Karen was accompanied by the Rt Hon Alok Sharma MP, Minister of State for Employment at Department of Work and Pensions, who also shared a speech highlighting the importance of British craftmanship, supporting local jobs and the revival of world-class shipbuilding in this country.

Opting for the build of the ship to be based within the UK, Red Funnel awarded the contract to the famous British shipbuilding company, Cammell Laird, based on the River Mersey at Birkenhead. In total, the project used 45 British supply chain businesses and generated 3,000-man hours of work for Cammell Laird’s apprentices.

Commenting on the naming ceremony, Fran Collins, CEO of Red Funnel, said, “Today has marked a very special occasion in the history of Red Funnel. The addition of a new ship is always an exciting time for everyone, and Red Kestrel marks an important new direction for us as our first-ever freight ship.

“With the growth in the Isle of Wight economy over recent years, we had reached a point where we could no longer fulfil the growing demand. Following extensive research, we identified that to increase capacity on our passenger vessels we would need a dedicated freight ferry to assist with the freight side of the business.

“Red Kestrel is designed to provide additional year-round freight capacity for our Southampton to East Cowes route, which currently handles 53% of all freight movements across the Solent. Our investment marks a vote of confidence that the UK and Isle of Wight economies are going to continue to grow and we can support this growth with the additional sailings Red Kestrel will provide.”

Tony Graham, Cammell Laird’s Chief Operating Officer, added: “Cammell Laird would like to thank Red Funnel for placing its trust in us to build this wonderful state-of-the-art ferry. Completing this ship sends a very strong message to the global maritime industry about Cammell Laird’s ferry building capabilities after we won the contract against international competition. Shipbuilding is back in a serious way on the Mersey and it has been brilliant to see Red Kestrel being built alongside the iconic RRS Sir David Attenborough, which is the largest commercial vessel built in Britain for a generation We are proud to see the Red Kestrel join a collection of ferries that Cammell Laird has built in recent years.”

Red Kestrel will operate between Southampton and the Isle of Wight and will officially enter service in May. As a freight vessel, she is limited to 12 passengers and constructed specifically to provide additional year-round freight capacity for Red Funnel’s Southampton to East Cowes route.

At 74 metres in length, she will provide 265 lane metres of RoRo capacity, allowing for 12 HGVs. To minimise the environmental footprint, the hull shape has been designed specifically to reduce wash and a propulsion package has been selected to make her highly fuel efficient. The use of proven azimuth thrusters supplied by Rolls Royce will also make the ship very manoeuvrable. Her dedicated drivers-only lounge offers comforts and features such as access to hot/cold food, reclining leather seats with footrests, free Wi-Fi and ample charging points. Red Kestrel will use the same berths as Red Funnel’s existing Raptor class RoPax ferries in Southampton and East Cowes. 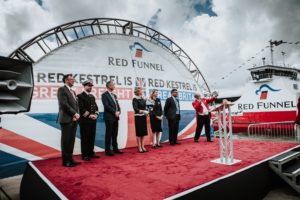