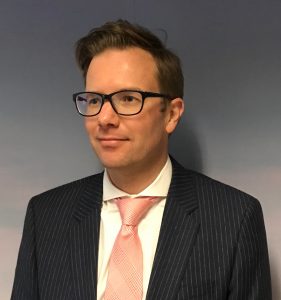 Condor Ferries is delighted to confirm the appointment of a new Executive Director – Operations, Captain Elwyn Dop, to replace Captain Fran Collins, who is leaving the company in order to take up a new position at Red Funnel Ferries in Southampton.

Captain Dop, who has been working as a consultant and advisor to Condor since 2017, replaces Captain Collins in June and his role will be to direct and oversee operational activities across the company’s fleet of four ships and five ports. He is a qualified Master Mariner with previous Operations Director level experience at Wightlink, the Isle of Wight based ferry company, will be based in Poole and travel around the Condor network.Captain Collins is to become the Chief Executive Officer of Red Funnel, after spending 16 years with Condor in various roles including Master Mariner, Director of Ports & Guest Services and has held the role of Executive Director – Operations for the past four years.

Speaking on the changes, Paul Luxon, welcomed the appointment of Captain Dop and expressed regret at Captain Collins’ departure but delight for her career advancement.

“Elwyn is well known to us through many years spent in a management role at Wightlink and more recently has provided consultancy to Condor through developing our safety regime and systems. He is far more than a safe pair of hands to help move the company forward and I am delighted to welcome him to the senior management team.

“We are sad though to see Fran leave after a stellar career with Condor but her opportunity at Red Funnel is a significant next step in her shipping sector career journey, which started with a six week placement at Condor back in 2002. Her depth of knowledge, professionalism and experience will stand her in good stead going forward, and we wish her well.”

Captain Dop takes up his new role on Monday 04 June.