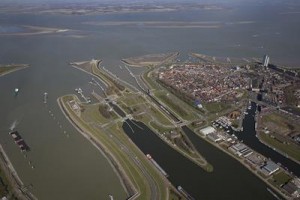 The Flemish Parliament ratified the treaty between the Netherlands and Flanders to construct a new lock in Terneuzen on Wednesday 28 October 2015. This lock will be  of great importance to port of Ghent. The Port Company is elated that the Parliament moreover ratified the treaty unanimously.  Building should start by 2017.

Why a new lock?

The lock complex in Terneuzen is the gateway to the ports of Terneuzen and Ghent and forms shipping connections between the Netherlands, Belgium and France. A new large lock within the present complex will offer plenty of opportunities as it will create a smoother flow from the Western Scheldt to the Ghent-Terneuzen Canal and further on in the direction of France. Also large seagoing vessels will then find their way to the ports in the hinterland. The new lock equally offers possibilities for the regional economy, as it can create new economic activities in both the Zeeland and Flemish regions and it will preserve and increase employment.