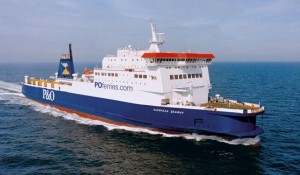 P&O Ferries has acted to meet strong demand in the English Channel ferry market and offer more choice to its customers by bringing a sixth ship back into service on the route.

The European Seaway – a 23,000 ton ship with the capacity to carry up to 120 freight vehicles – will return to the Dover-Calais route for the peak season from the beginning of August. It is expected to make eight sailings a day.

The European Seaway will supplement P&O Ferries’ existing five ship fleet on Dover-Calais which makes up to 50 sailings a day.

From August, P&O Ferries will be making 58 sailings a day across the English Channel in total – more than any other ferry company.

Janette Bell, Commercial Director at P&O Ferries, said: “The European Seaway will give us more capacity, and better equip us to support our freight customers, at a time when cross-Channel traffic is increasing in volume. By freeing up freight space on our five other Dover-Calais ships, it will also enable us more effectively to carry tourists between Britain and France during the peak summer season.”

“The route between Dover and Calais is vital to the British and French economies, to hundreds of thousands of businesses whose supply chains depend on cross-Channel travel and to the millions of tourists whose holidays begin on one of our ferries. We are doing everything we can to ensure that this vital sea crossing functions as efficiently as possible.”