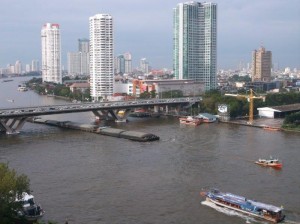 From a distance, it is difficult to conceive similarities between the River Thames and the Chao Phraya River in Thailand and yet there are interesting parallels not least because both are transport arteries.

But it does not rest there

In the same way that 215 miles of Father Thames runs through London, so the 230-mile-long river that bisects Bangkok is a living masterplan that has evolved to produce lifeblood to a major city and to facilitate the efficient movement of goods and people along its length. Both rivers have given access and wealth to their respective capitals which at approaching 10 million represent parallel population totals. Freight movements are also important to both particularly in respect of tug and barge traffic.

However, there are differences

In Thailand, the barges are loaded to the gunwales with local produce whereas the Thames facilitates the movement of inbound aggregate and outbound waste materials. In terms of imports and exports and in tune with most river fed capitals shipping has moved down river into deeper water and allows the conversion of onetime busy wharves into housing, offices, retail and food and beverage outlets.

Although both wet highways are proficiently used for the movement of commuters and tourists alike the total numbers are roughly 2 to 1 in favour of the Chao Phraya with around 50,000 travellers daily and there are lessons here for London’s river notwithstanding the long held tradition of river and estuarial passenger transportation.

In Thailand, there is not a catamaran in sight, all passengers almost without exception being carried very efficiently on monohull vessels that have an agility and grace not yet matched by their catamaran cousins. London take note.

But there is more. Despite 10,000 kilometres or nearly 6,000 miles distance between these two epic rivers they have shared issues when it comes to the need for rubbish collection, a near constant process.