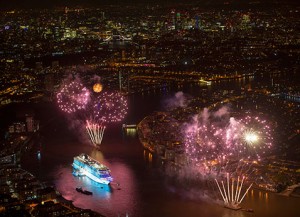 Less than one year ago, Viking Ocean Cruises® (www.vikingoceancruises.com) launched its first ship,Viking Star, and marked the arrival of the travel industry’s first entirely new cruise line in a decade. Today (5 May) in London the company officially welcomed its second ship, Viking Sea, to its fleet during a celebration on the Thames River in Greenwich.

Though Viking’s ocean ships are classified as “small ships” by Cruise Critic, the 930-guest, 47,800-ton Viking Sea is the largest ship ever launched in London. After passing through the Thames Barrier this morning, the ship received a warm welcome by 28 able sea men, who manned the yardarms of the Cutty Sark – the iconic 19th Century British clipper ship – and saluted Viking Sea as she arrived in Greenwich.

“Today is a proud day for our Viking family. London is one of my favourite cities, and Greenwich is a significant port for Viking. We look forward to bringing more guests here this spring and in future years,” said Torstein Hagen, Chairman of Viking Cruises. “Our ships are built for exploration; they are vessels that help our guests spend more time immersed in and surrounded by their destination. With the arrival of our second ship – and with four more sister ships on the way – we are focused on introducing travelers to the Viking way of destination-centered cruising, a unique style that was inspired by our success on the rivers.”

After arriving today in Greenwich, Viking Sea was positioned in the Thames River with decorated pontoons nearby to welcome guests for various shore excursions around the city. This evening onboard, as part of the ship’s christening – or naming – ceremony, guests were treated to a concert from Norwegian soprano Sissel and The Olav’s Choir. Guests also enjoyed a talk by Stein Olav Henrichsen, the director of Oslo’s Munch Museum – as part of the official launch of Viking’s exclusive new partnership with the museum that is designed to celebrate the life and artwork of Norway’s most famous artist, Edvard Munch, with daily “Munch Moments,” staged for guests each day in the ship’s Atrium.

During Viking Sea’s christening ceremony, Karine Hagen, Viking’s senior vice president and daughter of Torstein Hagen, served as ceremonial godmother and offered a blessing of good fortune and safe sailing for Viking Sea – a naval tradition that dates back thousands of years. Widely recognized as the face of the brand in Viking’s television ads and online cultural enrichment videos (www.exploringmore.com), Karine is responsible for infusing the company’s itineraries with extraordinary experiences. She is also the author of the children’s books, “The World of Finse” (www.finse.me), an educational series that showcases the adventures of Karine’s yellow Labrador, Finse. The series is set largely along the global destinations and routes of Viking’s cruises, and the books are sold onboard Viking’s ships. As a response to guest requests, Finse also took part in today’s christening events.

Several elements of the christening ceremony paid homage to the company’s Norwegian heritage. Instead of champagne for the traditional bottle-breaking, Viking Sea was christened with a bottle of Gammel Opland aquavit, which hails from the same town in Norway where Torstein’s mother and Karine’s grandmother, Ragnhild – also lovingly known as “Mamsen” – was born. “Mamsen’s,” the Norwegian deli onboard Viking Sea, was also named after Ragnhild, and Gammel Opland was her favorite brand of aquavit. Additionally, in honor of the original Vikings who once explored the British Isles, a Viking battle axe was used to cut the cord for the aquavit christening. The particular broad axe used is a replica of an 11th-century Viking axe discovered in the 1920s when it was dredged from the bottom of the Thames River near the London Bridge. Following the christening and a fireworks show held in the middle of the Thames River, Viking Sea will set sail tomorrow for Bergen, and from there she will continue on to Oslo, Copenhagen, Berlin, St. Petersburg, Tallinn, Helsinki and Stockholm on the popular 15-day Viking Homelands itinerary.

As part of Viking’s commitment to the broader London community, the company made several donations to local nonprofit organizations. Viking made a donation to the Royal National Lifeboat Institution (RNLI), with the funds to be directed toward two stations that are particularly relevant to Viking Sea – the Tower Lifeboat station and the Lerwick Lifeboat station. The Tower Lifeboat station is in the heart of London, where thousands of Viking Sea guests will visit; Lerwick, a name with Norse origins, is also a port of call for Viking Sea. Separately, in honor of Viking Sea Godmother Karine Hagen’s four-legged “daughter,” Finse, the company made additional donations to Battersea Dog & Cats Home and the The Mayhew Animal Home.

Viking Sea’s christening was the culmination of a maiden voyage that began April 3 when the ship set sail in the Mediterranean. Over the last month, she made stops in what will be regular ports, including Athens, Santorini, Kotor, Dubrovnik, Venice, Rome and Barcelona. Viking Sea will spend the summer sailing itineraries in Scandinavia and the Baltic; she will call on Greenwich again in June as part of Viking’s new Into the Midnight Sun itinerary that sails between London and Bergen and explores the northernmost reaches of Scandinavia and sails across the Arctic Circle.