Following 14 months in development and an investment of £10 million, Red Funnel, the original Isle of Wight ferry provider, will officially welcome its new vessel, Red Kestrel to its fleet with a naming ceremony on Thursday 25th April, 2019.

Red Kestrel marks the debut of Red Funnel’s first dedicated RoRo freight ship since the company’s inception almost 160 years ago. Opting for the build of the ship to be based within the UK, Red Funnel awarded the contract to the famous British shipbuilding company, Cammel Laird, based on the River Mersey at Birkenhead.

During construction, Red Kestrel shared the build hall with the iconic polar research vessel, RRS Sir David Attenborough. The new vessel will enter service in May and will operate between Southampton and East Cowes, Isle of Wight. 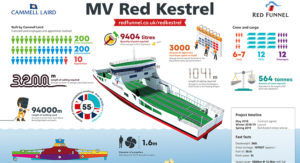