Serving a company or organisation for 35 years is a significant achievement in anyone’s books, but when it involves voluntary work for the RNLI it becomes altogether more noteworthy.

Ray Noble has been associated with the sea his entire life and during his time with Ramsgate RNLI served as crew, Deputy Launching Authority and Lifeboat Operations Manager (LOM). Despite recently retiring from the lifeboat service as LOM, at age 70, he is certainly not giving up now. Lifelong friend, Bill Moses says ‘Ray’s dedication to the lifeboat and safety at sea are what legends are made of and the RNLI should be exceptionally proud of his commitment and devotion.’

Anyone interested in purchasing one of the 9 prints should email: bill@billmoses.co.uk 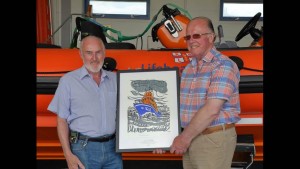