The handover in the executive management of U.N. Ro-Ro Isletmeleri A.S., carrying out intermodal shipping services between Turkey and Europe with Ro-Ro ships, has been realized. Sedat Gumusoglu, who has been the CEO of U.N. Ro-Ro ISletmeleri A.S. between 2011 and 2016 left his position to Selcuk Boztepe, an experienced executive in the logistics sector.

As of January 23, 2017, Selçuk Boztepe, former Southeast Europe Regional Director of DHL was appointed as the CEO of U.N. Ro-Ro, a company that offers value added intermodal shipping services to its customers. Sedat Gumusoglu, who has been the CEO at U.N. Ro-Ro between 2011 and 2016 will continue working as an advisor to the company’s board of directors.

Boztepe, who joined the DHL team in 1998 as a Field Sales Manager, received the “Best Sales Executive” award in the Europe and Emerging Markets (EMEA) region in the year 2000. He worked as the Project Manager in the integration projects of Deutsche Post DHL Group in Europe in 2003-2004, realizing projects like Sales Teams Integration, Revenue Management and European Sales Programme.

Selcuk Boztepe assuming the CEO position at U.N. Ro-Ro ISletmeleri A.S., initiated the international land route shipping services of DHL in Turkey in 2004, working as the Business Development and Sales Director (2005-2006) and then as the General Manager (2007-2008). He had been working as the Southeast Europe Regional Director at the company since 2009.

Selcuk Boztepe, a graduate of Marmara University, completed the “Contemporary Management Techniques” Executive MBA program of Maine University in United States in 2001. Boztepe, a member of Association of International Forwarding and Logistics Service Providers (UTIKAD) is married with one daughter. He has a good command of English. 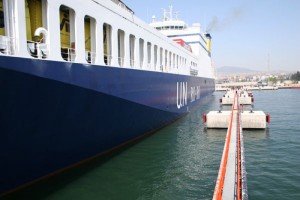