Port Philip Ferries are on track to commence ferry services between Central Geelong and Docklands, Melbourne in early December 2019, as announced by Paul Little at the annual Chairman’s Luncheon with Tourism Greater Geelong and the Bellarine.

The Geelong Flyer will run a twice daily service, connecting Geelong commuters and leisure travellers with Victoria Harbour, Docklands. They can now confirm that the ferry will dock in Central Geelong, adjacent the iconic Cunningham Pier. This new service demonstrates further confidence from Port Phillip Ferries and expands on the success of its current Portarlington service.

The team at Port Phillip Ferries have been working closely with Incat Tasmania to deliver Geelong Flyer, a purpose-built ferry for the Geelong service. Incat also built the existing ferry, Bellarine Express, which services the Portarlington to Docklands route. This route has seen continuous growth in numbers since launching in November 2016.  Geelong Flyer, the new fast ferry, is due to be delivered prior to Christmas, which ensures it is in the market for the summer peak season. The features of the 400-seater ferry will provide a transport experience that the region has never before had access to.

Port Phillip Ferries is also working closely with the City of Greater Geelong to form convenient land side access to the ferry, and reliable connections to the wider Geelong region. Tourism Greater Geelong and Bellarine is also playing a key role to support and welcome the anticipated influx of visitors to Geelong.

Quotes attributable to Paul Little AO, Founder and Owner of Port Phillip Ferries “Port Phillip Ferries are excited by and are looking forward to launching the Geelong Flyer in late- 2019. This service will not only benefit daily commuters, and offer an alternative to train and road travel, but it will provide a huge benefit for tourism and business in the Geelong region.”

“Since our successful trials last year, we have been working closely with the team at Incat to build a new ferry that will delight the expectations of our passengers. The 400-seat catamaran will feature indoor and outdoor spaces, an on-board licensed café, bike racks, charging stations and free Wi-Fi. It will deliver a unique, comfortable and reliable alternative means of travelling between Melbourne and Geelong.”

“We continue to witness the population growth both in Geelong and the wider Geelong region, as people and businesses choose to move to regional areas. Our new ferry service will be an added feature to those who have chosen to relocate to Geelong and those already based in the region. 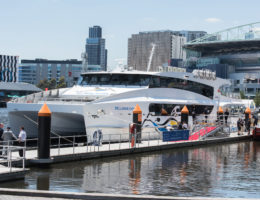